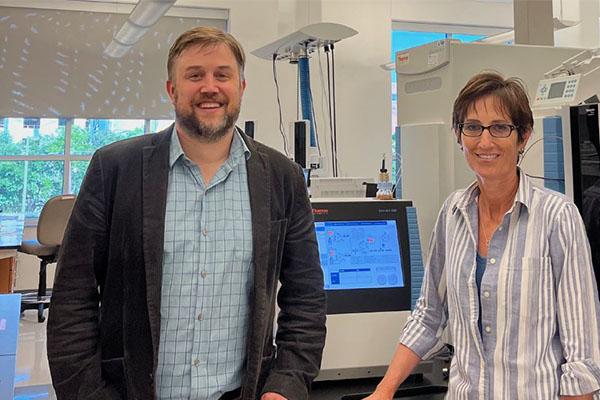 DMPI faculty Deb Muoio and Paul Grimsrud received a five-year NIH Grant (R01 DK129488) for their research proposal entitled Novel roles of PDK4 in regulating mitochondrial protein phosphorylation, carbon flux and metabolic resilience. The project aims to understand how mitochondrial carbon trafficking and bioenergetics are regulated by pyruvate dehydrogenase kinase 4 (PDK4), a protein that is highly responsive to nutritional cues and one that has received much attention as a potential therapeutic target.

Drs. Muoio and Grimsrud will lead an inter-disciplinary team, including DMPI faculty Dr. Tim Koves and Dr. Guofang Zhang, to investigate the hypothesis that PDK4 plays a much broader role in energy metabolism than previously suggested. The project will combine gain- and loss-of-function mouse models and a sophisticated mitochondrial diagnostics platform with several state-of-the-art molecular profiling tools (mass spectrometry-based proteomics, phospho-proteomics, metabolomics and stable isotope metabolic flux analysis) to delineate the PDK4 interactome and its critical physiological functions. This innovative technical approach will be used to probe a novel and potentially unifying mechanism regarding the role of PDK4 in re-directing carbon traffic during transitions between feeding, fasting and refeeding. This topic is highly relevant to the study of metabolic diseases, such as obesity and diabetes, and popular dietary interventions, such as intermittent fasting and time-restricted feeding.

The proposed studies are expected to provide new insights into molecular mechanisms that mediate whole body glucose homeostasis, as well as those contributing to the pathophysiology of type 2 diabetes.