Intercepting cancer before it's even cancer 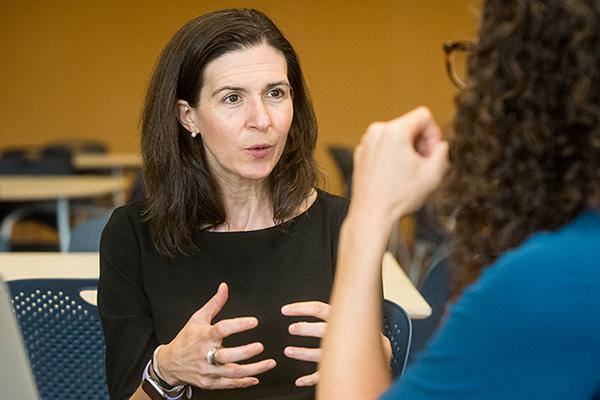 A new Duke Cancer Institute program led by Meira Epplein, PhD and DMPI faculty member Katherine Garman, MD, MHS aims to identify people at risk for cancer and to halt the disease in its early stages — ideally before it’s even considered cancer. Epplein and Garman, who co-lead the Cancer Risk, Detection, and Interception Research Program (CRDI), focus primarily on stopping incipient stomach cancer in high-risk groups, in part by studying the links between stomach cancer and a specific bacterium called H. pylori.

Epplein and Garman work together to understand disparities in stomach cancer and to find a way to identify the cases of H pylori that are most likely to turn into cancer. Funded with a National Cancer Institute Exploratory Grant (P20), they study banked tissue samples and surveys from people have been treated for H. pylori to understand the role of family history, diet, exposure to stress, and the strain of the bacterium in people who develop cancer.  The research in the CRDI program is heavy on new technology, but figuring out how to apply it to those who need it most is a priority, Epplein said. "We don't want everyone going through a mass of invasive screening tests," she said. "And, at times people who have access to these more advanced tests and screening are those with money and resources. We will need to understand how to make sure certain people aren't excluded."

Additionally, Garman uses cells from patients who donate tissue samples after an endoscopy (tissue biopsy of the stomach) to grow "organoids" — masses of cells that resemble a simplified organ. She is fascinated by the unusual patterns she has seen in organoids from patients who have inherited or acquired certain molecular mutations. Rather than growing in the usual uniform circle, these cells have arms or buds extending this way and that. "The message from these pictures is these molecular mutations are probably really important," she said. She noted that this is an ongoing area of research.

For instance, studies in the last few years have shown that the BRCA1 and BRCA2 mutations, long linked to increased breast and ovarian cancer risk, are also linked to increased stomach cancer risk, but that isn't yet taken into account clinically, Garman said. "With some of these molecular approaches, we will have better luck narrowing down the people who will really benefit from invasive screening tests, like an endoscopy where you have to miss a day of work and get sedation."